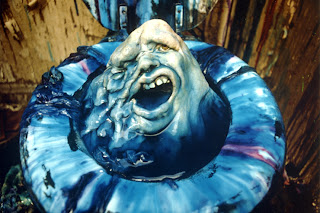 What's to say about this horror masterpiece that hasn't already been said? Sadly, that's not the case, no one really knows this movie. Street Trash is an overlooked, cult classic horror that deserves more love. I've taken it upon myself to become a lifelong ambassador for it, spreading the word and even giving away copies to friends and family who have never seen it (no wonder some of them don't speak to me anymore). I own two original big box VHS and two DVD copies in case of emergency.

I discovered this gem of a movie in 1987. My Dad's mate had a video van (remember those?) and he would often come to visit us and give me a chance to peruse the day's selection of titles before the customers got to have a look in. I remember spotting the fantastic cover art of a man in mid-melt practically leaping off the shelf at me. I was completely desensitized to horror by this point, having popped my horror cherry with Salem's Lot and The Exorcist 5 years prior, at the tender age of 7. Street Trash was just comic relief to a 12 year old horror veteran, but man was it fun.

The plot revolves around a bunch of down and out winos that get lucky when the owner of a liquor store finds a case of old beers (called Viper) in the cellar and puts them on sale for $1 a pop. The tramps hear the news and come running to get stuck in to the bargain booze. Some willing to part with a buck and others opting to thieve it from their bum brethren. The only downside being that the after effects are rather undesirable and cause a complete meltdown. A messy death awaits these unwitting destitutes. 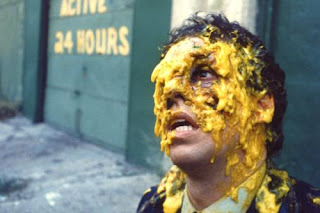 There are a lot of films, specifically horror, that I loved as a kid but are devastatingly disappointing when revisited. Many Come across as dated, hokey or just not scary to this jaded, cynical old man. Street Trash however, always delivers. It's hard to say what I love so much about this film and why I consider it to be among my absolute favourites. The acting is awful (many of the cast never starred in another film), the plot is skeletal and the narrative wafer thin. I guess it just perfectly captures the feel of the '80s, the ultimate decade for horror. When watching you get the impression that they must of had a shit load of fun making it. The checklist includes tramps melting, gang rape, necrophilia and a game of catch with a severed penis. Whats not to love, right? The shoestring practical effects look great and hold up well. This is a film that could only of been made pre-CGI.

Street Trash is probably the best melt-movie ever made, so good in fact that Jim Muro never made another film. He retired from directorial duties at the top of his game. Troma only ever dreamt of making a film of such heights.

Lee Gaze is a lead guitarist and one of the founding members of Lostprophets. You can follow him on Twitter here.
Posted by N R Mitchell at 04:03 1 comment: 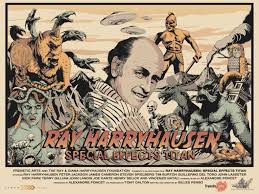 It was an absolute pleasure to review Ray Harryhausen: Special Effects Titan for Eye For Film. As I'm sure you've already guessed, I enjoyed Gilles Penso's celebratory documentary quite a bit. Click on the link below to see why. 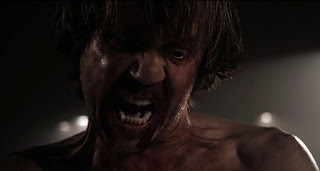 The word "favorite" implies (in the popular imagination at least) something enjoyable or pleasant. As a result, my choice of favorite film is something of a misnomer as Srdjan Spasojevic's A Serbian Film (2010) is not enjoyable in this traditional sense. I choose it as it is the film that makes me think and indeed wonder at the capacity of cinema. I love it because it makes me feel. A Serbian Film is the story of a fading male porn star who is dragged into a world of taboo film making on the promise of an idealized freedom for his family. It is hardly the stuff of Disney or even a well-loved, hallowed horror. In truth, I don’t give a rat’s arse about A Serbian Film's supposed allegory of life in Serbia. I’m interested in the human story. I want to know what Milos feels. The sheer damn nastiness of this film is what I love about it - it brutalises your senses visually, empathetically and intellectually every second that you don't press the "off" button.

The most obvious strength for me is Srdjan Todorovic's acting as Milos. Without his performance, the film could easily have dissolved into tawdry torture porn. I use the phrase on purpose as I believe that this sub-genre, if done well, can be bloody harrowing and tantalizing, as it is here. Alternatively, torture without emotional impact means nothing as the ghost flits the machine and we lose grip of aesthetic understanding of pain and are unable to contextualize it. Todorovic manages to convey incredible sexual aggression in the same breath as horror and absolute disgust at his own actions. His snarl, used on so many of the posters is, to me, the epitome of the film. It’s not a demonstration of emotions as much as a simple fact of a maelstrom of confused sensations and wants. He even looks perfect for the part in the eyes of many traditions, a classic hero with a chiseled jaw and a mane of golden hair rendered raging against gradually going to seed, a He-Man going hollow.

However, Todorovic on his own wouldn’t make the film what it is. The cinematography is in some places stunning. The scenes with son Petar are beautifully lit and lend a sense of hope to the narrative, taking it beyond the realms of pure horror into life in all of its shades. It really does remind you of balmy days where you try and feel at ease and try to enjoy having the sun on your skin yet have those inevitable close-but-awkward conversations. Nevertheless, this genuine attempt at tenderness is for me the vital counterpoint to the brutality. My favorite scene shows Milos, the human animal, enacting and enthralled in the orders of his director and following what he believes is the folk tradition of his land. What happens next is devastating and delicious all at once. It is also very erotic if - and until - you let yourself go.
As my students have said, you cannot 'unsee' or forget this film. I defy anyone to be left untouched at the end. It is the feeling of being altered and your body just taking over – what I really think terrifies and tantalizes us all.

Dr. Karen Oughton is a Lecturer in Media Communications at Regent's College, London. You can follow her on twitter here.
Posted by N R Mitchell at 16:21 No comments: 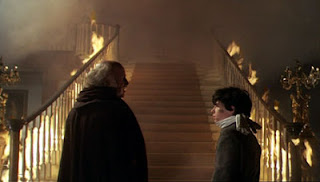 My latest review for Eye For Film is of Lionel Jeffries' 1972 family movie The Amazing Mr Blunden. Click on the link below to see what I made of the director's adaptation of Antonia Barber's 1969 novel The Ghosts. 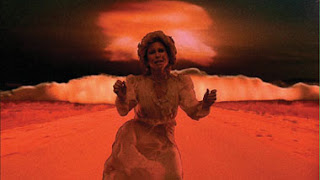 The latest monthly theme for Electric Sleep is sleep, and I immediately thought of Joseph Ruben's 1984 sci-fi/horror movie Dreamscape. Click on the link below to read my thoughts on a movie that's somewhat unfairly overshadowed by many of the eras other sci-fi/horror releases. 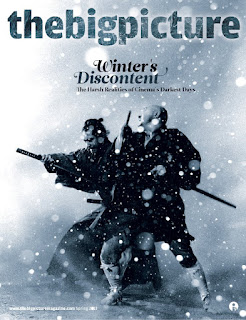 The new issue of The Big Picture magazine is available now as a free PDF download. Themed under the title 'Winter's Discontent', the issue features pieces on The Great White Silence, Dr Zhivago, Hara-Kiri: Death of a Samurai, Let the Right One in and Ikiru among others. Guest writer Pamela Hutchinson, who runs the Silent London website has penned an enlightening article on Way Down East, and longtime contributor Scott Jordan Harris takes a look at the Rosebud sled from Citizen Kane, one of cinema's most evocative objects. Click on the link below to download the issue, we hope you enjoy it and share it with your film-loving family and friends. You can find The Big Picture on Facebook here and on Twitter by searching for @BigPicFilmMag. 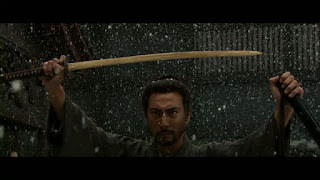