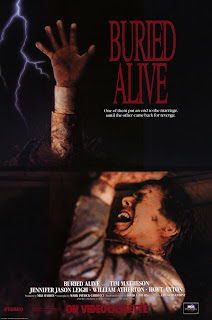 Before Frank Darabont became something of a household name after directing The Shawshank Redemption (1994) and The Green Mile (1999) he began his feature length directorial career with this 1990 TV movie. One of a large number of movies to revolve around the ghastly fate of being interred whilst still very much alive, which notably include the Roger Corman adaptation of Edgar Allen Poe's The Premature Burial (1962), George Sluizer's chilling Spoorloos (1998) and Rodrigo Cortes' thriller Buried (2010), Buried Alive is due for release on DVD for the first time on the 17th of October. Tim Matheson stars as regular Joe Clint with Jennifer Jason Leigh as his unhappy and unfaithful wife Joanna, a city girl who has grown increasingly desperate to get away from their quiet small town existence and live a life of pampered luxury with her lover, local doctor and scenery chewing sleaze-bag Cortland (William Atherton). Coerced into poisoning Clint by Cortland, with a large life insurance policy payout as added bait, Joanna's botched deed leaves Clint in a state of paralysis with his vital signs undetectable...and you can guess the rest.

Buried Alive is deadly dull, never once appearing as anything other than the cheap TV movie that it is, and not even the usually entertaining presence of Jason Leigh can disguise the fact. The chills are run of the mill, the acting broad and the entertainment value sparse. The low budget, exposition heavy dialogue, signposted plot-line and B-movie cast (Jason Leigh apart) make for an inauspicious début for the man who would go on to direct the much loved prison set Stephen King adaptations as well as The Mist(2007), another, hugely underrated, King adaptation. With his recent firing from the highly popular TV series The Walking Dead, which he developed from the comic book series of the same name, the headstrong Darabont has seemingly once again managed to alienate himself from the money men. His steadfast refusal to alter the downbeat ending of The Mist led to limited studio funds being made available for the film's marketing and advertising budget, condemning the movie to a limited theatrical run on far fewer screens than it deserved. Buried Alive on the other hand has done well to garner a DVD release as only the die-hard or easily pleased horror fan will be able to take much from this paltry sub-Hitchcockian, Allen Poe influenced misfire.

The final DVD giveaway courtesy of the good folk at Dogwoof is Shannon Walsh's H2Oil. This 4 star (Total Film) documentary described by Empire as 'hard hitting eco-activism' takes a look at Canada's tar sands and how they are fast becoming the debating ground in the battle of oil profit versus ecological awareness. To win the DVD simply email me at neil.mitch1972@googlemail.com no later than midnight on Friday the 26th of August.
Posted by N R Mitchell at 05:35 1 comment: 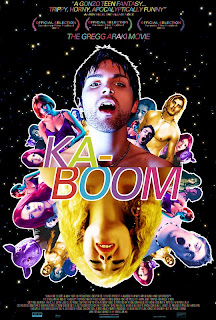 After confusing critics, fans and detractors with his polar opposite, oeuvre redefining films Mysterious Skin, a mature exploration of abuse and its consequences, and Smiley Face, a cheesy stoner comedy, Gregg Araki is back on more familiar ground with his latest movie, Kaboom. Familiar ground to Araki, however, is a strange, messy and provocative place. Having established himself as a cult director of anarchic, sexually outré, youth obsessed movies such as Totally Fucked Up, Nowhere and The Doom Generation, defined by their day-glo colour schemes, outrageous set pieces, pop culture heavy scripts and nihilistic edge, Araki now presents us with a movie perfectly summed up in one review as 'Twin Peaks 90210'.

Araki's riotous tale centres around sexually confused student, Smith (Thomas Dekker) and his offbeat collection of campus friends, including his Adonis like room-mate Thor (Chris Zylka), promiscuous London (Juno Temple) and wisecracking Stella (Haley Bennett). When bizarre and sinister incidents begin to occur around him Smith is plunged into a paranoid world that threatens not just his existence but that of civilisation as a whole. Taking in a mysterious death cult, attackers in animal masks, comedic exchanges, a typically guitar heavy soundtrack and an increasingly acid-fried plot-line, plus copious amounts of nudity, Zeitgeisty dialogue and oblique, at times almost nonsensical sequences Kaboom will annoy as many as it excites. I'm in the latter camp and fell for it hook, line and sinker. Araki has conjured up an effervescent, genre defying slice of entertainment that is neither multiplex or arthouse fodder, straying as it does between crypto-philosophical musings, science fiction themed sub-plots and porno-lite sex scenes all within a cheesy, teen- soap style visual palette.

There's no doubting that Kaboom is wafer thin, peopled as it almost exclusively with impossibly beautiful characters, hipster fashions and an apparent disregard for a tightly constructed narrative, but that's exactly why it works. Araki is no fool, and love him or hate him, he's an assured director who has chosen to put Kaboom together in this fashion. It's a blackly comic reflection of the ADHD infused entertainment culture we live in - a contemporary society of plastic, tech heavy gadgets, sound-bites, violence, promiscuity and generation gaps as much as it is its own insular tale of conspiracy, youth, sexual awakening and a fast approaching Apocalypse. 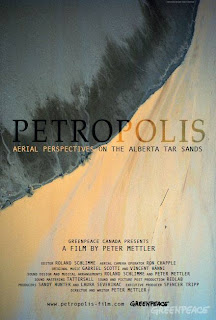 After a two week break for a tools down holiday the competition to win a DVD courtesy of Dogwoof Productions is back. Up for grabs this week is Peter Meller's Petropolis: Aerial Perspectives on the Alberta Tar Sands. Described by The Guardian as 'stunning' and by The Financial Times as 'scary, nightmarish and oddly beautiful' Petropolis will be a great addition to your DVD collection, and of special interest to anyone with an interest in ecological matters and documentary films.
To be in with a chance of winning the DVD just email me, putting Petropolis competition in the subject header and I will enter you into the draw. Closing date for entries is Friday the 12th of August.
http://youtu.be/pdFT3bZtnok - Petropolis trailer
Posted by N R Mitchell at 05:28 1 comment: http://www.roguecinema.com/article2828.html
Here's the link to this month's review for RogueCinema.com. It's on the British hostage thriller Desperate Measures. Low budget, independent British movies veer between hidden gems, run of the mill B-movies and embarrassing failures, have a read of the review to see which end of the scale Desperate Measures sits.
Posted by N R Mitchell at 03:28 No comments: 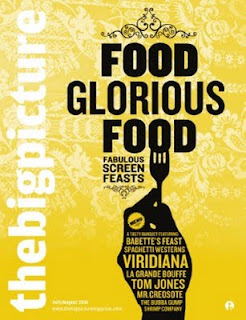 http://tinyurl.com/3m5zdae
Here's a link to the latest issue of The Big Picture magazine.
This issue's theme is 'food' and my article is on Bubba Gump's Shrimp Company from Forrest Gump. Best read with snacks to hand! The next issue, which I'll be guest editing, is due in a couple of months and has the theme of 'coming-of-age' in the movies but for now enjoy this feast of film and food.
Posted by N R Mitchell at 14:49 No comments: