Around the World in Eighty Movies - number 1 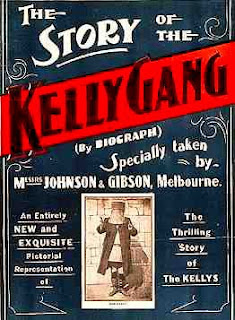 Country: Australia
Title: The Story of the Kelly Gang
Director: Charles Tait
Cast: Frank Mills, Nicholas Brierley, Elizabeth Tait, John Tait
Year: 1906
Running time: 60 Minutes (approx)
Genre: Crime / Drama
Notable for: Being the first feature length film
You would be forgiven for thinking that the first feature length film would have come from the US, France or Britain given their status as the three leading countries in the development of the moving image and the fledgling film industry. Surprising as it may sound though, that honour goes to Charles Tait's Australian shot bio-pic of Ned Kelly, The Story of the Kelly Gang, released in 1906 and originally running at just over an hour in length. Made just 26 years after Kelly was hanged The Story of the Kelly Gang was written and directed by Charles Tait, whose showbusiness family were the owners of the Athenaeum Hall, a Melbourne concert venue. Filmed in and around the city Tait's film, which ushered in a wave of 'bushranging' movies, was long thought to have been destroyed or lost until some remaining sections came to light in the late 70s and early 80s. Digitally restored by the Australian National Film and Sound Archive the remaining pieces of Tait's film, around 14 minutes in total, have been released on DVD and can be seen on YouTube -
Technically rudimentary they may be, with close ups, camera movement and editing not yet fully developed as stylistic techniques due to the still basic nature of the equipment available, but these remaining scenes from The Story of the Kelly Gang are vital fragments of moving image and the impact of Tait's work on the development of cinema cannot be understated and it remained in constant circulation for ten years after its initial premier in Melbourne on Boxing Day 1906.
The first of many subsequent big and small screen takes on the famous outlaw and his fellow accomplices The Story of the Kelly Gang is Australia's entry into the Around the World in 80 Movies series, showing as it does the beginnings of what we know as feature length film-making today.
Posted by N R Mitchell at 17:22