To Die For... The Insect Woman (Imamura Shohei) 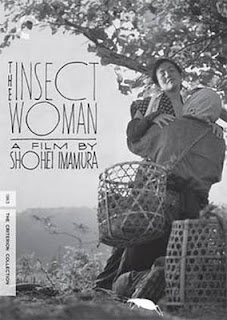 My favourite film, The Insect Woman, by Imamura Shohei, isn't all that well known, but should be. It's about a lower class Japanese woman who struggles through life, has a child, and works as a maid for a posher woman. It's shocking - at one point the Japanese woman seems to suckle her dad. In another, we see a child scald herself with boiling soup. But there are two reasons why I love it. Firstly, its style. The Insect Woman is one of the most beautiful films ever made. It's shot very widescreen, and the compositions are breathtaking. The scalding scene is done in two amazing shots, one far away from the kid, one from above the stove, with the child out of focus below. The second reason I like it is because of what it says about people. The first shot is an insect scuttling across the land. Then we cut to the woman doing the same. For the rest of the film she scuttles, feral, determined not to give up. To use an insect as a metaphor for a woman is unflattering in a way, but Imamura loves her for her unstoppability, her survival instinct, her glorious forward propulsion. The film moves me to tears and thrills me with its pictorial beauty. - Mark Cousins
Mark Cousins is a director, presenter and film critic. His credits include the TV series Scene by Scene and Moviedrome. His latest venture, The Story of Film: An Odyssey, a 15 part exploration of the history of film, is currently being shown on More4 on Saturday nights.
Posted by N R Mitchell at 05:09