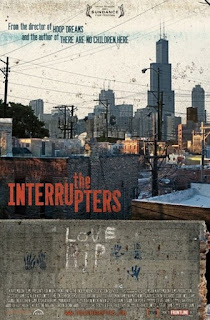 Steve James, the director responsible for the highly acclaimed Hoop Dreams in 1994, has delivered one of the year's finest documentaries with The Interrupters. Due for release on DVD courtesy of the always interesting, and increasingly vital, Dogwoof label, James' latest non-fiction film follows Chicago's violence interrupters programme over the course of one year, beginning in summer and ending the following spring. Largely culled from ex-gang members, erstwhile drug dealers and former prison inmates the violence interrupters intervene, as you'd imagine, in situations between the city's warring gang members and troubled, vulnerable citizens with one goal in mind - to stop the moments of high tension spilling over into outright violence. With the city's police force and government officials seemingly making little headway in reducing the crime, murder and assault figures, and the media portrayals of the city as a war zone becoming ever more trenchant, the violence interrupters face, on paper at least, a nigh on impossible task in cleaning up their streets and changing the reputation of the city's poverty stricken areas.
James's non-interventionist technique (he is never seen nor heard) allows for the violence interrupters and the people they come into contact with to remain as the central focus of the film, developing as it does into a portrait of inner city life that stands as a richly detailed microcosm of world-wide urban problems. Poverty, lack of education, diminishing life prospects, crumbling social structures and territorial pride dominate the everyday lives of The Interrupters' subjects. Ameena Matthews, daughter of one of the city's most infamous gang leaders, and one time gang member herself, Cobe Williams, whose relative youth provides an important link to the city's youths,and Eddie Bocanegra, who killed a rival gang member during his life as a one time prolific car thief, are just three of the interrupters followed as they try to keep tensions between the gangs and the locals at bay. These alternately fearsomely straight talking, rueful, experienced and reformed characters are the eyes and ears of the audience on these sadly embattled streets. Moments of tenderness, humour and humanity counter-balance the grimly depressing surrounding environment, senseless violence and inter-family divides.
What could have been a worthy, 'educational' documentary is, in the hands of James, a thoughtful, enlightening and ultimately hopeful insight into the ongoing attempts of largely neglected communities to bring an end, or at least a noticeable reduction, to the crime, drug abuse and sense of despair that threatens to engulf their neighbourhoods. Inspirational and unmissable.
Posted by N R Mitchell at 12:28