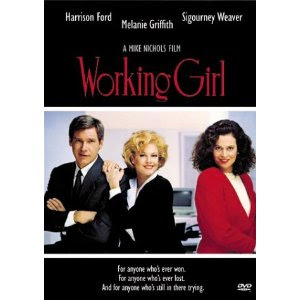 My favourite film is the ultimate 80s power-shouldered fantasy about making it on Wall Street and yet also a deeply sweet movie about feminism and class. Working class secretary Tess McGill is nearly 30, and battling sexism every step of the way trying to make it as an investment banker. Backed by her wisecracking best friend (Joan Cusack), she fights off an evil Queen (Sigourney Weaver) and captivates a lost knight (Harrison Ford) along the way, using the armour of wit (“I have a head for business and a bod for sin, anything wrong with that?”), intelligence and borrowed clothes. With its feisty leading ladies Working Girl combines the feminist charm of 30s screwball comedies with a darker sense of the forces of privilege at work. I love that it’s packed with soon to be famous actors in tiny parts: Notably Kevin Spacey as a coked-up, sleazy banker. The famous pullout at the end is lifted from a Kurosawa film, placing our heroine as merely a worker bee in a giant hive. Still, set almost entirely in the world of Wall Street offices, the film is not just a fascinating period piece, but captures the magic of making it in New York City.
Samira Ahmed
Samira Ahmed is a freelance journalist, writer and broadcaster at the BBC, where she has presented Radio 4's PM, The World Tonight and Sunday as well as presenting two of the 2011 proms for BBC4. Her work has appeared in The Guardian, The Independent and on The Spectator's arts blog Night & Day.
Posted by N R Mitchell at 05:09