Around the World in Eighty Movies - number 7 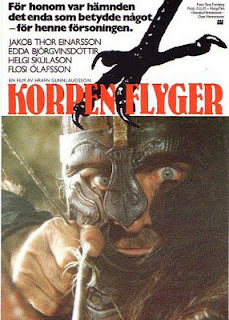 Icelandic film-maker Hrafn Gunnlaugsson kick started his loose Viking trilogy, sometimes referred to as 'Cod Westerns', with When the Raven Flies, an epic tale of clan loyalty, betrayal, Norse paganism and revenge. Iceland's bleak but stunning coastline provides an awesome backdrop to one man's mission to wreak revenge on the Viking raiders responsible for the death of his family many years before. Shot on location and with all the stunts and fight sequences performed by the actors, When the Raven Flies is in many ways a throwback to the days of the Hollywood historical epics, albeit on a smaller budget and infused with a harder edge and more authentic milieu. Never likely to be a powerhouse in the world of cinema, Iceland has over the last twenty years or so produced some intriguing contemporary crime dramas and offbeat comedies, but Gunnlaugsson's films hark back to a more primal, elemental time and When the Raven Flies is a bloody, barbarous vision of life in the era of the Vikings and their Gods.
Posted by N R Mitchell at 16:30