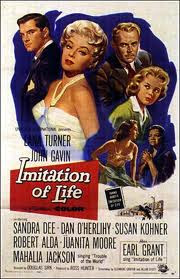 It is really impossible to select a favourite film so I’m going to pick my FIRST favourite film:Imitation of Life by Douglas Sirk. Made in the late 1950’s I first saw it in a film A’level night class I took when I was twenty-three at Tower Hamlets College in London. It was the first film that I ever wrote an essay about, and the first film that truly made me love cinema and want to know more about it and see more films.
A beautiful movie, from the dazzling opening titles, it is also a critique on the family and the American dream. It is, especially for the time, a really powerful examination of race and class. All this is of course packaged into wonderful, colourful melodrama. Your heart is squeezed when the young Sarah Jane discards her black doll and begins to try and pass as white. And at the end there is an amazing and heartbreaking scene when Sarah Jane’s mother Annie, who she has become estranged from, dies. The funeral procession and service is fabulously elaborate, including Mahalia Jackson singing Trouble of the World. It was the first time I had ever heard of Mahalia Jackson and it is the same song I feature in Dreams of a Life as my small homage to a great film.
Carol Morley
Carol Morley is a British film-maker, her previous films include the documentary The Alcohol Years (2000) and the fictional drama Edge (2010). Her latest film, the docu-drama Dreams of A Life (2011), is currently on general release.